The Oxford dictionary defines an oasis as a fertile spot in a desert where water is found. It can also be described as a peaceful area in our everyday lives. That is where Betty & I find ourselves in Arizona this month. 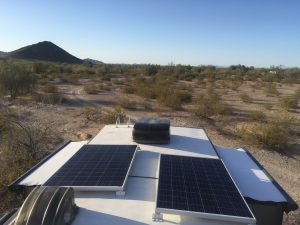 Now that we have added a solar system to our motorhome, we are able to sustain our own little fertile spot in the desert, without the need of a noisy generator to power our equipment. When we arrived in Quartzsite, we chose to stay in one of the four large, long-term visitor areas, comprising thousands of acres of Bureau of Land Management (BLM – the equivalent of Crown Land in 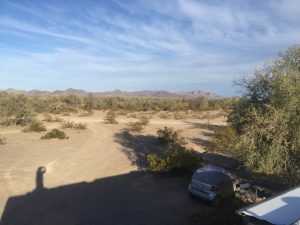 Canada) open land with no assigned camp spots. There is a paved entrance to each of the four, and we paid $40. total for a 14 day stay, allowing us to dump our tanks and fill up with fresh water as often as we need. There are other BML lands where camping is free. However, then you have to pay to dump & add water, so we thought $2.86 a day to camp isn’t a bad deal! (BTW, I think they have seasonal rates that are even cheaper!)

Attached to this post are some pictures of our current surroundings. One is a

panoramic 180 degree shot from the roof of our motorhome, and another

shows the other 180. One shows Betty on our patio, with the seating area, BBQ stand, and fire pit on the dusty sand of our “yard”. As mentioned, there 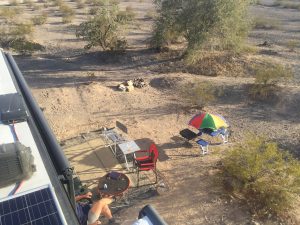 are no assigned campsites, so you can park as near to the road, or as far away as you wish. Because few of the paths through the desert lands are graded, only adventurous risk takers drive long motorhomes or trailers to the farther spots down the atv trails. Regardless, at this time of year the distance between units provides both privacy and quiet. 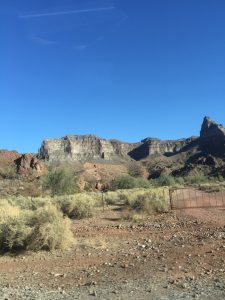 Apparently, January in Quartzsite is a different place, with the number of campers swelling into the hundreds of thousands. Many groups organize rallies during that time, to take advantage of all the added pop-up vendors. Lots of folk bike, hike, or ride ATVs in the area, and all are a friendly bunch. The atmosphere both in the desert and in the town of Quartzsite is very laid back, with more than a few hippies that never left the 1960s. LOL 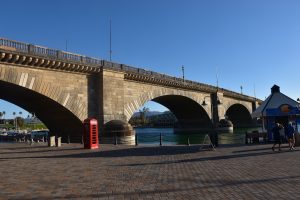 To add to our adventure, yesterday Betty convinced Charlie & me to go with her on a day trip to see the London Bridge. Now I know what you’re thinking: “Wow, these must be rich jet-setters who can fly to England and back the same day!” But no, we actually drove our little Smart car 60 miles up the road to Lake Havasu City, where Robert McCulloch (of McCulloch chain saws) bought 13,000 acres of land, and then for $2.5 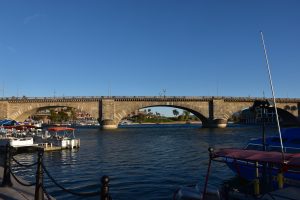 million bought the London Bridge from the City of London, and relocated it to his desert oasis. The Colorado River is dammed south of the town, so it is a unique experience to see large palm trees, green grass, and beautiful green golf courses in the area, which is all surrounded by jagged mountain ranges.

The two oases described above are quite different from each other. One is a lush, commercial district, while the other is an uncommercial, undeveloped corner of God’s earth. Both have their appeal, and both provide fertile areas for renewal. Whichever direction you go, we hope you can find a peaceful area in your everyday life. 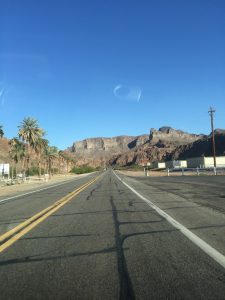